Raut and Gadani: Comparative characterization study of plant based calcium versus synthetic calcium

Comparative characterization study of plant based calcium versus synthetic calcium

Background: Calcium is an essential mineral which supports bone health as well as serves as a major therapeutic intervention that can prevent and delay the incidence of osteoporosis. Multicellular aquatic plants like Lithothamnion calcareum are a rich source of plant based calcium.

Material and Methods: Plant based Calcium and Synthetic Calcium sources were subjected to instrumental analysis such as SEM, ICP-OES and XRD, and comparisons were done followed by interpretation.

Conclusion: Both Plant based and Synthetic Calcium can be distinguished using SEM, ICP-OES and XRD techniques. Outcomes of this study enlightens the probable reasons for enhanced bioavailability in case of plant based calcium sources as compared to synthetic calcium sources.

Calcium is the most abundant mineral and the fifth-most abundant element in the human body. Calcium is an essential mineral to support bone health and serves as a major therapeutic intervention to prevent calcium deficiency disorder.1 It is an important micronutrient widely believed to affect bone health and human metabolism. Calcium enters the circulation through food or calcium supplements, and a dynamic balance is maintained between blood and bone calcium. Calcium deficiency can cause conditions like osteoporosis, rickets, epilepsy, and anemia.2, 3

Calcium ions play a vital role in the physiological and biochemical processes of organisms and cells: in signal transduction pathways where they act as second messengers; in release of neurotransmitter from neurons; in contraction of all muscle cells; as cofactors in many enzymes as well as in fertilization. The Ca2+ ion acts as an electrolyte and is vital to the health of the muscular, circulatory, and digestive systems; is indispensable to the building of bone; and supports synthesis and function of blood cells. For example, it regulates muscle contraction, nerve conduction, and blood clotting. As a result, intracellular and extracellular calcium levels are tightly regulated by the body. Calcium can play this role because the Ca2+ ion forms stable coordination complexes with many organic compounds, especially proteins. More than 99% of calcium in the body resides as hydroxyapatite, a calcium phosphate molecule in the skeleton.4

A well-balanced, carefully planned, plant based diet can provide adequate calcium to the body. Not consuming plant based foods containing high amounts of calcium may increase the risk for impaired bone mineralization and bone fractures in people. Adequate calcium intake is the key to bone health, which appears to be irrespective of dietary preferences.5 Some plant-based calcium sources include tofu, mustard and turnip greens, bok choy, and kale. Some other plants contain calcium that is bound to oxalate and therefore is poorly absorbed.6 Foods rich in calcium include dairy products, sardines, salmon, soy products, kale, and fortified breakfast cereals.7, 8, 9

There are different types of supplements. Elemental calcium is a pure mineral, but in the natural form, it exists with other compounds. Supplements contain varied proportions of calcium compounds. For example:

Soybeans are rich in both oxalate and phytate, yet soya products have relatively high calcium bioavailability. In contrast, dried beans which are also rich in phytate, have lower calcium bioavailability.12 The natural sources of readily bioavailable calcium are rare. However, the mineralized remains of certain red algae are rich sources of bioavailable calcium.13 Red algae belong to a group of multicellular aquatic plants that are photoautotrophic in nature.14 One such example would be Lithothamnion calcareum, the skeletal remains of which contain calcium carbonate (~32% calcium by weight) and 72 other trace elements.13, 15 This marine algae accumulates calcium carbonate in its cell walls in the form of crystals.

Red coral algae precipitate calcium by ‘trans-calcification’ mechanism. This mechanism is enzymatically driven, in which HCO3- present in seawater are converted to carbon dioxide CO2 by an external enzyme- carbonic anhydrase. This in turn produces CO3- which is used in calcification in the form of CaCO3.16 This calcium carbonate derived from marine red algae is used as a plant based calcium source in many countries due to its bioavailability and beneficial anabolic effects on bone calcification.17

Calcium is a common constituent of multivitamin dietary supplements, but the composition of its complexes in supplements may affect its bioavailability. This varies by solubility of the salt involved as calcium citrate, malate, and lactate are highly bioavailable, whereas the calcium oxalate is less. Other calcium preparations include calcium carbonate, calcium citrate malate as well as calcium gluconate. The intestine absorbs about one-third of calcium eaten in the form of free ion, and plasma calcium level is then regulated by the kidneys.

Samples of Calcium were subjected to instrumental analysis like SEM, ICP-OES and XRD. Scanning Electron Microscope (SEM) is a type of Electron Microscope and the method known as SEM analysis is used very effectively in microanalysis of solid inorganic materials. It produces images by scanning the surface with a focused beam of electrons which interact with atoms in the sample and produce signals that give information about the surface topography and composition of the sample. Scanning of electron beam is done followed by combining its position with the intensity of the detected signal to generate an image. In the most common SEM mode, atoms excited by the electron beam emit electrons which are detected using a Everhart-Thornley detector. The number of secondary electrons that can be detected, and thus the signal intensity, depends on specimen topography. Some SEMs have the ability to achieve resolutions greater than 1 nanometer (nm).18

In the present case, both samples were analysed using SEM as per below mentioned two different settings:

Inductively Coupled Plasma-Optical Emission Spectroscopy (ICP-OES) is an analytical technique that identifies the composition of elements present in different samples. The key strengths of ICP-OES include the identification of the types and ratios of elements in complex samples. The type and relative amount of each element present within the complexity of a compound is detected by the generated signals. ICP-OES is used in the analysis of complex samples, and in applications such as analyzing trace elements in the human brain, determining the chemical composition of electronic cigarettes and assessing the purity of pharmaceutical compounds. 19

In the present case, 1 g of plant based calcium sample was digested with conc. HF followed by 10 ml conc. HNO3. After complete digestion, solution was filtered and volume made upto 25 ml with 5% HNO3. Then this sample was injected in ICP-OES and calcium was measured at 396.84 nm. Similar procedure was carried out for synthetic calcium.

X-Ray Diffraction Analysis (XRD) studies the crystalline structure, atomic arrangement, crystallite size and imperfections in the structure. Compared to amorphous material, a crystal has well-defined properties like melting point, solubility and IDR. These parameters should be known in order to control the final product. The analysis of XRD works on constructive interference of monochromatic X-rays. The X-rays produced by a cathode ray tube are filtered to produce monochromatic radiation. They are collimated to concentrate and directed toward the sample. Interaction of the incident rays with the sample produces constructive interference when the conditions satisfy Bragg’s Law (nλ=2d sin θ). The relation between the diffraction angle, wavelength of electromagnetic radiation, and the lattice spacing in a crystalline sample is given by this law.20

In the present case, 1 gm of plant based calcium sample was subjected to XRD analysis (Range 0 to 80) at wL=1.54060 and 2θ angle versus Intensity was determined.

Name of Instruments and its make 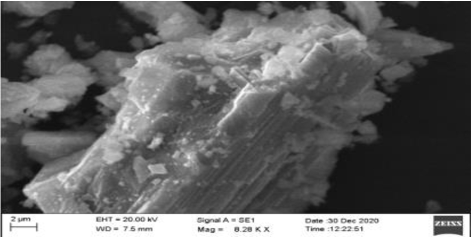 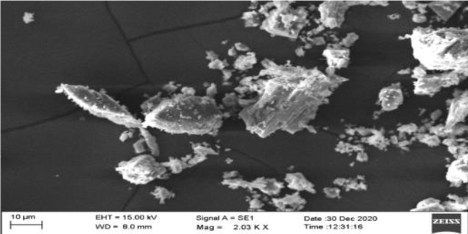 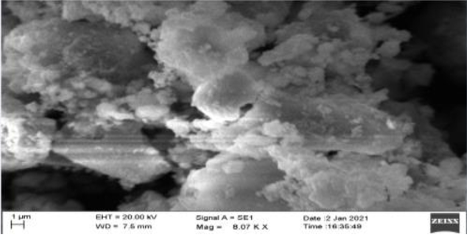 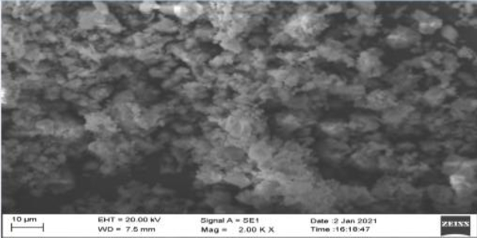 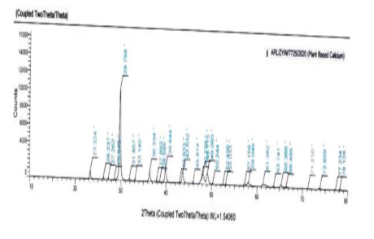 The ICP-OES study results showed the presence of Boron and Magnesium along with Calcium in both plant-based as well as synthetic sources of calcium. Inspection of results from SEM revealed that plant based calcium were smaller, even sized crystals (isotropic) as compared to synthetic calcium crystals which were uneven (anisotropic). Further, XRD results revealed plant based calcium to possess two 2θ values, whereas in case of synthetic calcium, it showed a single 2θ value.

Elble et al., 2011, highlighted the importance of smaller sized crystals of calcium carbonate stating that they are better absorbed in the body compared to larger sized crystals.21 The different mineral phases of calcium carbonate - calcite, aragonite, vaterite exhibit a high solubility which makes these minerals bioavailable and bioresorbable.22 This may be one of the defining factors of plant based calcium being more bioavailable and better absorbed as compared to synthetic form which exists in a single crystal structure.

A study carried out in female mice involved the analysis of the effects of a plant based mineral rich extract from Lithothamnion calcareum on their bone structure and function when supplemented with a high fat Western style diet. Ideally such a high fat diet interferes with the bioavailability of minerals. The results, however, revealed that the mice fed with such a diet and supplemented with the mineral rich extract had better bone structure and function compared to the ones on a low fat chow diet.23 Another study involved the use of the calcium rich, multi-mineral complex derived from Lithothamnion in ovariectomised rats suffering from osteoporotic bone loss. The effect of this complex was studied against the effect of calcium carbonate. The multi-mineral complex was shown to have a positive effect on the bone structure, composition and mechanical properties as compared to calcium carbonate.24

The above mentioned effects of such multi-mineral complex from marine algae- Lithothamnion can be attributed to the presence of calcium, manganese, copper, zinc and many other minerals present in the supplement that improve bone health and manage osteoporosis by increasing the mineralisation of osteoblasts as revealed in the study by Gormon et al., 2011.24 Studies have also shown that the osteogenic potential of this multi-mineral algal complex is enhanced by additional supplementation of Vitamin D3.25