Eprosartan (EPS), (E)-3-[2-butyl-1-[(4 carboxyphenyl)methyl]-1H-imidazol-5-yl]-2-[(2 thienyl)methyl]propenoic acid (Figure 1)A, is a highly selective, non-peptide angiotensin-II antagonist. It has been shown to inhibit angiotensin-II induced vasoconstriction and to reduce systolic and diastolic blood pressure.1 Hydrochlorothiazide (HYT), 6-chloro-3,4-dihydro-2H-1,2,4-benzothiadiazine-7-sulphonamide-1,1-dioxide (Figure 1)B is a diuretic drug.2 The rationale behind use of this drug combination is that in treatment of hypertension in patients whose blood pressure is not adequately controlled by monotherapy. Oral administration of EPS with HYT has been found to be more effective than use of either drug alone.3

Other work dealing with analysis of EPS and other drugs in pharmaceuticals and biological samples includes use of LC–MS–MS,4 capillary zone electrophoresis,5 and micellar electrokinetic capillary chromatography.6 Analysis of EPS in biological samples by HPLC–UV7 and a chemometric method for optimization of solid-phase extraction HPLC–UV8 of EPS in plasma have also been reported. There are several reports of the analysis of HYT individually or in combination with other drugs, including use of HPLC, HPTLC, spectrophotometry, and non-aqueous potentiometric titration.9, 10, 11, 12 As far as we are aware, no validated HPTLC method for analysis of EPS and HYT in bulk and in tablets has been reported in the literature. The purpose of this research was to establish such a method and, after validation in accordance with International Conference on Harmonization (ICH) guidelines and the directives for good laboratory practice,13, 14, 15, 16, 17 to use the method for analysis of the drug content of tablets.

Chromatography was performed on 20 cm × 10 cm aluminum-backed TLC plates, coated with 250 μm layer of silica gel G 60 F254 ( E. Merck, Darmstadt, Germany supplied by Anchrom Technologists, Mumbai). The solubility of EPS and HYT were checked in different solvents and methanol was selected as the solvent for dissolving both the drugs. Samples were applied to the plates as 8 mm bands, by means of 25 microlitre Linomat V applicator (Camag, Muttenz Switzerland) equipped with a Hamilton syringe (Bonaduz., Switzerland). The slit dimensions were 6.00 mm × 0.30 mm and the scanning speed was 20 mm s-.1 A constant application rate of 1 μL/s was used and the space between two bands was 5 mm. The monochromator bandwidth was set at 20 nm, each track was scanned thrice and the baseline correction was used. Ascending development of the plates was performed with Chlroform: Acetonitrile: Glacial Acetic Acid (7:3:1, v/v/v) as mobile phase in a Camag 20 cm × 10 cm twin trough glass chamber (Camag, Muttenz, Switzerland); previously saturated for 30 min with mobile phase. The optimized chamber saturation time for mobile phase was 10 min at room temperature. The length of chromatogram run was 8 cm. The average development time was 20 min. After development, plates were dried. Densitometric scanning was performed on Camag TLC Scanner 3 in the reflectance absorbance mode at 254 nm for all measurements and operated by Wincats software version 3.15 supplied by Anchrom technologists, (Mumbai).

Overlay spectra of both drugs was acquired to select appropriate wavelength of analysis.

Chromatographic separation studies were carried out on the stock solution of EPS and HYT. Various solvent mixtures were tried to achieve optimum resolution between both drugs as shown in Table 1.

The mobile phase consisting of Chloroform: Acetonitrile: Glacial Acetic Acid (7:3:1, v/v/v) was prepared. Then the mobile phase prepared was transferred to twin trough chamber in which one side of trough a filter paper wetted with mobile phase was kept to cause saturation of chamber faster.

The stability of both drugs in the mobile phase was studied for 12 Hours.

The specificity of the method was ascertained by comparing densitogram of tablet formulation with that of diluent, mobile phase, standard drug sample of EPS and HYT.

Accuracy of the method was carried out by applying the method to drug sample to which known amount of EPS and HYT standard powder corresponding to 80, 100 and 120% w/w of label claim were added. The mixtures were analysed by running chromatogram in optimized mobile phase.

Robustness was demonstrated by change in chamber saturation time to 10 min and 20 min and change in wavelength to 252 and 256 nm of detection.

A powder equivalent to 600 mg of EPS and 25 mg of HYT from the trichurated tablet formulation was accurately weighed and dissolved in methanol, sonicated and volume was made to 100 ml with methanol. The solution was filtered through Whatman filter paper no. 41 and volume was adjusted to 100 ml with the same solvent. After filtration, the stock solution was diluted with methanol to give 0.6 µg/ml of EPS and 0.025 µg/ml of HYT. The amount of EPS and HYT present in mixture was calculated.

EPS and HYT in methanol showed absorption maxima where the isoabsorptive point of these two graphs was observed at 254 nm as shown in Figure 2. Therefore, 254 nm was selected as detection wavelength for both the drugs.

After several trials, mixture of Chloroform: Acetonitrile: Glacial Acetic Acid (7:3:1, v/v/v) was chosen as a mobile phase for analysis. Other chromatographic conditions like run length, sample application rate and volume, sample application positions, distance between tracks, detection wavelength were optimized to give reproducible Rf values, better resolution and symmetrical peak shape for the two drugs as shown in Figure 3, Figure 4The Rf value of EPS and HYT was found to be 0.26 ± 0.02 and 0.42 ± 0.02 respectively. The drug solution diluted with mobile phase was found to be stable for 12 hours. 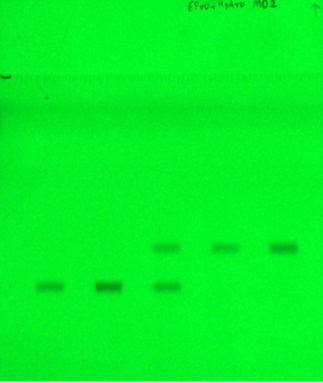 Chromatogram of EPS and HYT 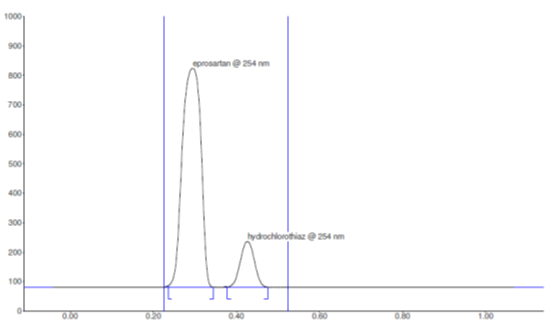 From stock solution, EPS and HYT were separately spotted on the TLC plate to obtain final concentration of 200-700 ng/band. The plate was developed using previously described mobile phase. The results obtained are shown in Table 2. The peak areas were plotted against the corresponding concentrations to obtain the calibration graphs (Figure 5, Figure 6).

[i] *Mean of three estimations. 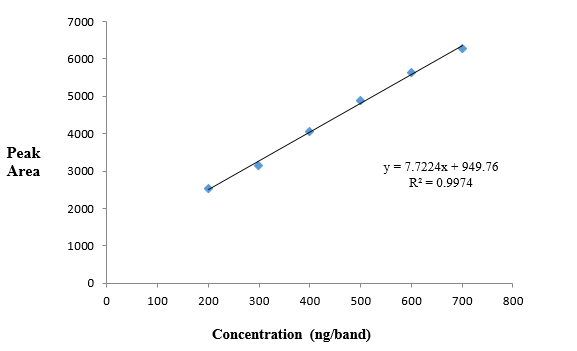 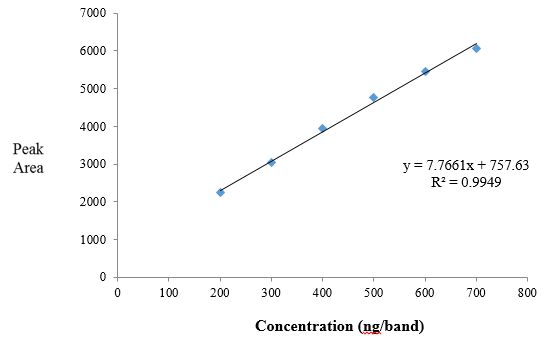 Limit of Detection and Limit of Quantitation

The LOD and LOQ for EPS and HYT are given in Table 3.

The chromatogram of formulation showed only two peaks for EPS and HYT indicating that there is no any interference of any excipients from the formulation.

Recovery analysis of EPS and HYT

[i] *Mean of three readings

It shows Assay results for EPS and HYT

The repeatability of sample application and measurement of peak area were expressed in terms of % RSD and was found to be less than 2%.

The Robustness of sample application and measurement of peak area were expressed in terms of % RSD and was found to be less than 2%. The results are shown in Table 6.

The amount of EPS and HYT present in tablet formulation was calculated by comparing peak area of sample with that of standard. Densitogram was recorded. The results of analysis of formulation are given in Table 7.

Two peaks were observed in the chromatogram of the formulation, indicating that there is no interference of any extraneous material. The mean % drug content with %RSD of formulation is given in Table 7.

A precise, specific, and accurate HPTLC method was developed for simultaneous determination of EPS and HYT from Tablet Formulation without interference from the exicipients. The resolution was achieved using Chloroform: Acetonitrile: Glacial Acetic Acid (7:3:1, v/v/v) as a mobile phase using Aluminum sheet with silica gel G 60 F 254 as a stationary phase. The method was linear in the concentration range of 200-700 ng/band. The method is also robust with respect to chamber saturation time and detection wavelength.