Shaikh and Dighe: A review on: Medicinal properties of ginkgo biloba

A review on: Medicinal properties of ginkgo biloba

Traditional medicine and medicinal plants, as well as their study of modern chemical principles, may lead to the development of newer, less expensive medications. Ginkgo Biloba is well-known for curing a variety of ailments and is utilized in a variety of traditional medicinal formulations. Scientists and researchers from all over the world have spent decades studying the chemical composition of the entire Ginkgo Biloba plant, as well as its biological and pharmacological functions. These investigations established Ginkgo Biloba's medicinal potential in modern medicine and as a prospective drug discovery candidate. The current paper provides an overview of Ginkgo Bilobaethnobotany, phytochemistry, pharmacology, and toxicity.

Medicinal plants are a rich source of chemicals that are useful in medicine. Medicinal plants have been utilized to treat a variety of ailments since antiquity. For the creation of innovative pharmaceutical goods, systemic examination of these plants yields a variety of bioactive compounds. There has recently been a surge in interest in the pharmacological examination of diverse plants utilized in various traditional medical systems. Many traditionally known plants have been intensively examined using sophisticated scientific techniques and reported for various therapeutic qualities, such as anticancer activity, anti-inflammatory activity, antidiabetic activity, anthelmintic, antibacterial activity, antifungal activity, hepatoprotective activity, antioxidant activity, larvicidal activity etc. and so on, in the previous few decades.

Ginkgo Biloba L. is a tree species that has a long history of medicinal use due to the numerous benefits it can provide to human health. Researchers are still interested in G. Biloba, studying its mode of action and discovering new beneficial properties after decades of research. Terpenoids and flavonoids are active components in Ginkgo biloba extract have antioxidant qualities, antiasthmatic effects (helping to relieve bronchospasm), skin regenerative and wound-healing properties.Ginkgobiloba extract has also been shown in trials to increase blood circulation, reduce clot formation, strengthen the walls of capillaries and their elasticity, and protect nerve cells from injury that can occur when they are deprived of oxygen. Due to its unique pharmacological properties and effects, G. biloba is a popular herb.is commonly used to treat different stages of Alzheimer's disease, concentration difficulties or even concentration deficit disorder, dementia and memory impairment, cerebral insufficiency, intermittent claudication (leg pain and cramps caused by artery obstruction), vertigo, and tinnitus (hearing loss). It's worth noting that each element of Ginkgo biloba extract has its own therapeutic mechanism, and that these processes, when combined, provide the extract its own pharmacological activity.1

Ginkgo has been found in rocks dating back to the Triassic period, and possibly even earlier. Its leaves have been found in Permian and Carboniferous rocks. Even today, Ginkgo biloba grows. As a result, botanists refer to it as a "living fossil." It's also known as the world's oldest seed plant.Ginkgobiloba's plant body is saprophytic, and the saprophyte has a general appearance that is similar to that of several conifers. The trees grow ex-currently and can reach heights of up to 30 metres. Ginkgo trees exhibit a very uneven branching pattern. The branches are dimorphic, meaning that they have long shoots with unlimited growth potential and scattered leaves, as well as dwarf shoots with limited development potential.

Long shoots can grow up to 50 cm in a single year. Dwarf shoots take a long time to mature. A 2-3 cm long dwarf shoot could be several years old. There isn't always an obvious demarcation between the two sorts of shoots, and the former may transform into a dwarf shoot for a year or two before reverting back to a long shoot.3 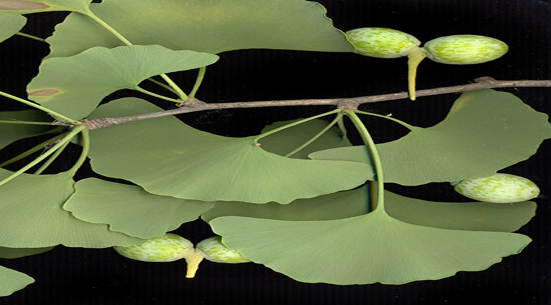 The Ginkgo biloba tree is a tall, slender, and lovely tree. It's known as Maiden-hair Tree because its young leaves, both in form and venation, are extremely similar to those of Adiantum (also known as Maiden-hair Fern). It's the world's oldest seed plant. In some parts of China and Japan, it is grown for its edible seeds. Though Chamberlain (1935) doubted whether Ginkgo biloba exists in the wild today, Sporne (1965) declared unequivocally that “if it survives naturally anywhere, it is restricted to a small and relatively inaccessible region in South China.”Li (1956), however, mentioned certain evidences that Ginkgo still exists in the wild state in South-eastern China, along “the north western border of Chekiang and south eastern Anhwei”. In China and Japan it is grown as a sacred tree in temple gardens. It is cultivated in the United States as a shade tree. It is also successfully cultivated in some gardens of Europe, America and India.

Kaempfer, a European botanist, proposed the name "Ginkgo" in 1690, and Linnaeus approved it the following year (1771). Linnaeus proposed the name "biloba" to the species because of the regularly notched feature of the fan-shaped leaves (1771). The correct spelling, according to Moule (1944) and Thommen (1949), is Ginkyo. Li (1956), However, he used and lobbied for the term Ginkgo, claiming that the maiden hair tree has been properly named Ginkgo and "surely will be remembered as such forever." The tree's original name was Salisburia adiantifolia, but it was eventually altered to Ginkgo biloba.

Despite the fact that the chemical components of the ginkgo leaf have different intrinsic pharmacological capabilities, they work together to produce more strong pharmacological effects. Ginkgo leaf extract, for example, protects neurons from oxidative stress, possibly reducing tissue degradation in dementia sufferers. Ginkgobiloba leaf extract also enhances blood flow throughout the body by restoring the equilibrium between prostacyclin and thromboxane A2, which leads to better vasoregulation. The inhibition of phosphodiesterase and the release of catecholamines are hypothesised to cause vascular contraction and an improvement in venous tone. The anti-toxin and anti-cell death properties of Ginkgo biloba leaf extract may also be attributable to the suppression of beta-amyloid peptide-induced toxicity and cell death. Ginkgo biloba leaf extract is thought to inhibit monoamine oxidase A and B, as well as catechol-O-methyl transferase (an enzyme that breaks down adrenergic transmitters) 3) Increases the amount of alpha-adreno receptors in the brain, which decreases with age.4 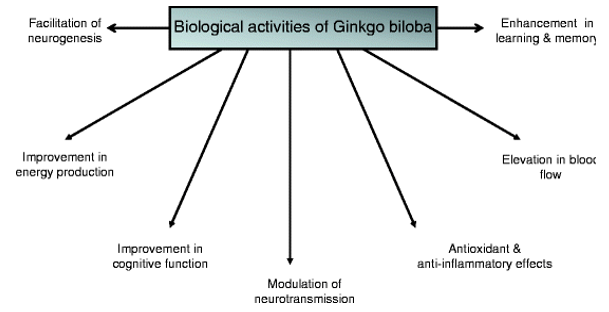 Autism: There was a recent study that involved 47 children with a DSM-IV-TR diagnosis of autism. In addition to risperidone, patients were randomly randomised to take Gb or placebo. The ABC-C scale was the key outcome. According to the aforementioned subscale, there was no statistically significant difference between the two groups. As a result, Gb did not appear to be an effective risperidone supplementary therapy. Even in childhood, it looked to be safe and well accepted.5

ADHD: In 50 ADHD patients, Salehi et al. conducted a double-blind trial of Gb against methylphenidate. In compared to methylphenidate, the researchers found that Gb showed no equivalent efficacy. Even though Gb showed a considerable reduction in side effects (particularly insomnia and loss of appetite), methylphenidate showed a significant improvement in a variety of symptoms.6

A study was conducted to see how acute dosages of EGb affected cognitive ability (Kennedy et al., 2000). Eighteen healthy female and male college students (ages 19–24) were given 120, 240, or 360 mg of EGb or a placebo. The study enrolled a total of a hundred patients, with the key outcome measures being the ADAS-cog, the Geriatric Evaluation by Relatives Rating Instrument (GERRI), and the CGIC. There was a substantial difference in the EGb group for the ADAS-cog and GERRI at the end point, but no difference in the CGIC. In the year 2000, the same results were obtained.8

The effect of pure polysaccharides from Ginkgo biloba leaf (P-PGBL) on the inflammatory response caused by lipopolysaccharides (LPS) in RAW264.7 murine macrophage cells, as well as the potential processes involved. P-PGBL administration significantly reduced LPS-induced protein and mRNA expression of Toll-like receptor 4 (TLR4) in a dose-dependent manner, according to the findings. In LPS-stimulated RAW264.7 macrophage cells, P-PGBL treatment reduced the expression of the nuclear factor-B (NF-B) p65 protein. P-PGBL, on the other hand, reduced the levels of pro-inflammatory cytokines such IL-1 and IL-6. Finally, P-PGBL has an anti-inflammatory impact by blocking the TLR4/NF-B signalling pathway, which reduces inflammatory cytokine production.9

Ahmed and colleagues investigated the efficiency of EGb in the treatment of rats with hepatocellular carcinoma (HCC). The histological characteristics of the liver tissue were shown to be greatly improved by EGb. After EGb therapy, ING-3 gene expression was unregulated, while Foxp-1 gene expression was down regulated in the liver. Furthermore, EGb reduced the levels of alpha-fetoprotein (AFP), glypican-3 (GPC-3), and carcinoembryonic antigen (CEA) in HCC rats, implying that EGb's anti-cancer characteristics were produced by its anti-proliferative and apoptotic properties in the HCC animal model.11

While orally administered GBE was found to significantly improve the speed of information processing in dual-coding tests in a crossover study of 18 elderly men and women (mean age 69.3 years), a study of eight healthy females found differences between GBE and placebo in only one of three methods of evaluation.13

Simultaneous use of a soft-laser for cochlea exposure and administration of Ginkgo biloba extract for four weeks has been reported to be beneficial in 20-50 percent of patients. Although the mechanism of action of soft lasers is uncertain, it has been established that light causes athermic activation of biological processes. In fact, the Ginkgo-soft-laser combination proved quite efficient in the treatment of chronic tinnitus. Ginkgo gave more oxygen, and the laser activated repair mechanisms by directly targeting flavoproteins.14

Based on the vascular hypothesis of glaucomatous optic nerve damage, this study was conducted to assess the effect of GBE and anthocyanins on visual function in patients with normal tension glaucoma (NTG). A chart review of 332 participants (209 men and 123 women) who were treated with anthocyanins (n = 132), GBE (n = 103), or no medication (control, n = 97) was used to conduct retrospective analysis. These findings imply that anthocyanins and GBE may aid in the improvement of visual function in certain people with normal tension glaucoma.15

D-galactose was used by Liuet al to create an ageing phenotype in cardiomyocytes. They discovered that EGb 761 administration reduced the number of SA—gal positive cells while also lowering diastolic Ca2+ and increasing its reuptake. They also discovered that SERCA2a aided in the improvement of diastolic dysfunction in ageing rats.16 Kubota and colleagues investigated the effect of EGb on intracellular calcium levels in rat thoracic aorta endothelial cells and discovered that EGb might increase Ca2+ levels in those cells, resulting in vasodilation.17

For 30 days, spontaneously hypertensive rats (SHR) were fed a diet containing 0.05 percent -0.5 percent ginkgo in Kubota's study. The level of intracellular calcium was increased in endothelial cells, which appeared to alleviate the impairment of dilatory function in these cells, according to the scientists.18

By lowering the amount of Ca2+ and mitochondrial membrane potential, Han and Lifound that EGb could prevent angiotensin II and hypoxia-induced vascular endothelial cell injury.18

The levels of free radical scavenging enzymes and risk variables were investigated in eight patients who had an aorto coronary bypass and were treated with EGb for two months in a clinical trial by Rodriguez et al.20

Ethnomedical and scientific reports about the medicinal properties of Ginkgo Biloba represent it as a valuable plant and establishing it as a candidate for the future drug development.

I Hindmarch Activity of Ginkgo biloba extract on short-term memory15198615924