Fenticonazole Nitrate (FTZ) chemically is 1-[2(2,4-dichlorophenyl)-2 {[4 (phenyl sulfanyl) phenyl] methoxy} ethyl] 1H-imidazole (Figure 1). It is an Imidazole antifungal drug used in the treatment of vulvovaginal candidiasis. It is active against a range of organisms including dermatophyte pathogens, Malassezia furfur, and Candida albicans. It acts by three mechanisms such as inhibition of the secretion of protease acid by Candida albicans, damage to the cytoplasmic membrane; and by blocking cytochrome oxidases and peroxidises.1, 2

A detailed literature revealed few analytical and bio-analytical methods such as UV-Spectrophotometry6, RP-HPLC 7, 8, 9, capillary electrophoresis 10 and LC-MS 11, 2, 12 reported for the determination of FTZ.

To our knowledge, no efficient and inexpensive HPTLC method for the estimation of FTZ in bulk and vaginal capsule formulation has been discovered till date. The objective of the current work is therefore to develop a simple, sensitive, convenient, precise and cost-effective HPTLC method for evaluating FTZ in bulk and vaginal capsule formulation in compliance with the International Harmonization Conference (ICH) guideline Q2 (R1). 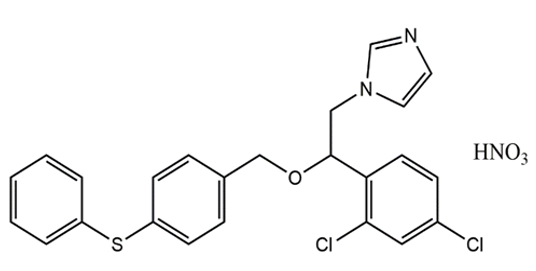 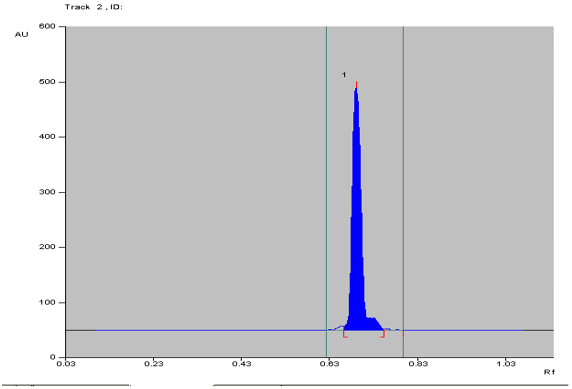 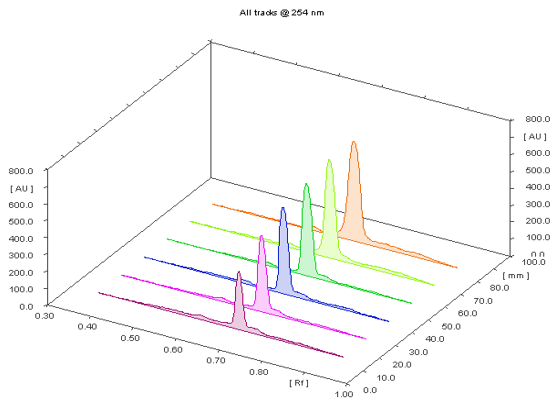 Peakpurity spectra of FTZ extracted from capsule, scanned at the peak — start, peak- apex, and peak-end positions of the band (Correlation > 0.999). 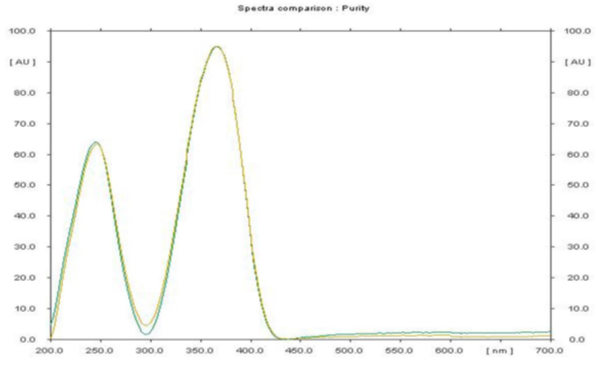 Solubility of FTZ was checked in aqueous solution of different hydrotropic agent including Sodium Benzoate, Sodium Acetate, Sodium Citrate, Urea, Benzalkonium chloride, Pluronic (F68, F127), Potassium Acetate, and Polyethylene Glycol. FTZ was found to be completely soluble in Pluronic F127 solution of various strengths such as 30%, 20%, and 10% (w/v). Minimumconcentration (10% w/v) of Pluronic F127 was chosen for solubilization of drug for entire study.

100g of Pluronic F127 was transferred in 1000 ml volumetric flask containing 700 ml water, sonicated for 20 minutes and volume was made up to the mark with water.

The stock standard solution was formulated by weighing 10 mg of FTZ. The weighed powder was transferred into a 10 ml volumetric flask and diluted up to the limit with Pluronic F127 (10% w/v) to achieve the concentration of 1000 µg/ml.

Selection and optimization of mobile phase

Firstly, to isolate the spots, single solvents were chosen based on their polarity. Then spots were developed with Toluene: Methanol: Triethylamine (4:1:0.5 v/v/v). In this mobile phase, the drug was separated with good resolution and with sufficient Rf. The Triethylamine was used as modifier into the mobile phase.

Accurately weighed 10 mg of FTZ was transferred into 10mL volumetric flask dissolved in methanol, shaken manually and volume was adjusted to mark using same solvent. 1.5 ml further diluted to 10 ml with methanol and appropriate volume of 10 μl of this solution containing 1500 ng/band of FTZ was applied on NP-HPTLC plate. The plate was developed, dried and scanned as described above.

Ten vaginal capsule of Fenticonazole nitrate were accurately weighed; average weight was determined and equivalent to 60 mg of Fenticonazole nitrate was transferred into 100 ml of volumetric flask contain 50 ml Pluronic F127 (10%w/v) sonicated for 45 min and volume was adjusted to mark using same solvent. It was filtered through a 0.45µm filter (Millifilter, milford, MA, USA). From the filtrate, an appropriation volume of solution was applied on plate to get concentration 1500 ng/band.

The developed HPTLC system was validated according to ICH guideline Q2 (R1) for various parameters such as linearity, accuracy, precision; robustness, detection limit, and quantitation limit.13

With reference to the limit of detection (LOD) and limit of quantification (LOQ), the sensitivity of the developed HPTLC method was determined. The noise was measured six times with blank spot scanning of Pluronic F127 (10 % w/v). The drug solution concentration series (10-500ng/band) was applied to the plate and examined for LOD and LOQ determination. LOD was calculated as 3 times the noise level, and LOQ was calculated as 10 times the noise level. LOD and LOQ were determined experimentally by diluting the known concentrations of FTZ till the average responses were around 3–10 times the standard deviation (SD) of the responses for six replicate determinations.

The specificity of the method was assessed by examining FTZ in presence of additives of FTZ in vaginal capsule formulations. The bands of FTZ in the sample were verified by comparing Rf values and comparative spectra of the sample with those of the standards. The peak purity of FTZ was evaluated by comparing the spectra of standard FTZ and FTZ- isolated from the vaginal capsule at the peak-start (S), peak-apex (A), and at the peak-end (E) points. This peak purity concludes that no impurity was found in the vaginal capsule formulation comparing with the peak of standard drug solution.

Choice of the most suitable solvent system is the crucial step in HPTLC method development. So, for the proposed HPTLC method various solvent systems were attempted, initially, Toluene: Methanol: Ammonia (4:1:0.5 v/v/v) was used as a mobile phase but tailing of peak obstruct the results. Then spots were developed by replacing the ammonia with triethylamine i.e. Toluene: Methanol: Triethylamine (4:1:0.5 v/v/v). In this mobile phase the drug was separated with good resolution and with suitable Rf0.65±0.03 (Figure 1). It was seen that chamber saturation time and solvent migration distance are significant in chromatographic separation when tank saturation time is less than 15min and solvent migration distance more than 80mm produced a scattering of analyte band. Therefore, Toluene: Methanol: Triethylamine 4:1:0.5 (v/v/v) proportions with chamber saturation time of 25 min at 250C and solvent migration distance of 80mm was used. A well-specified convenient spot of FTZ with appropriate migration 0.65 obtained. Linearity of an analytical method is ability of test results that are directly, or through a mathematical transformation, proportional to concentration of analyte. The established HPTLC method was found to be linear in concentration range of 500-3000ng/band (n=6) confirming obedience of the system to Beer’s law.(Figure 3) displays three dimensional overlay of HPTLC densitogram of the calibration bands of FTZ at 254 nm. Linear regression data for the calibration curve was given in (Table 1). The LOD and LOQ for FTZ were found to be 10.14 ng and 30.74ng respectively which shows the adequate sensitivity of the method. Specificity of the method for FTZ was proved from the spectral scan (Figure 4) for FTZ in bulk and in vaginal capsule formulations indicate that there is no merging or co-elution of interfering peaks with FTZ, so there is no interference from any excipients present in vaginal capsule formulation. The accuracy of this HPTLC method was assessed by the implementation of an analytical technique to recovery analysis where the quantity of standard was spiked on pre-analyzed sample solution. The % recovery of FTZ was observed in range of 99.57-99.68. The % recovery values indicate that developed HPTLC method was highly accurate in nature. The precision was done by three parameters intra-day, inter-day, and repeatability precision. The intra-day precision % RSD was 0.25-0.46 and inter-day precision %RSD was 0.57-108. The repeatability % RSD was found to be 0.87. The % RSD less than 2 indicate that method is extremely précised. Analysis of vaginal capsule formulation i.e. capsule assay was done. The % RSD value of vaginal capsule assay was found to be 1.32 denotes that results are within range (Table 2). Robustness was performed by changing four parameters and the % RSD value for all four parameters was found to be in acceptable range. This denotes that method was robust in nature. An overview of the validation parameter is shown in (Table 3).

A new HPTLC method was successfully developed for the determination of FTZ in bulk and vaginal capsule formulation. The developed HPTLC method was validated to different parameters as per ICH guidelines and it confirmed that the developed method is simple, accurate, linear, precise, robust, sensitive, and economical in design from the results. This approach can be applied for routine quality control.

C Onal E Binay A Onal Development and validation of a stability-indicating ultra-fast liquid chromatographic analysis for the simultaneous determination of fenticonazole and its related substances in pharmaceutical formulationsRevue Roumaine de Chimie2020652201910.33224/rrch.2020.65.2.09

ICH Steering Committee: International Conference on Harmonization (ICH) of Technical Requirements for Registration of Pharmaceutical for Human Use. Validation of Analytical Procedure-Methodology2006https://www.ema.europa.eu/en/documents/scientific-guideline/ich-q-2-r1-validation-analytical-procedures-text-methodology-step-5_en.pdf