Institute of Nutrition and Food Science, University of Dhaka Bangladesh

Many herbal plants have been recorded in medicine for their usefulness in menstrual disorders, however, a few have been extensively examined for their pharmacological activities. These plants have been recorded to have usefulness in the management of painful menses, preventing miscarriages, prolonging birth, or inducing birth. Therefore, the effects of herbal plants on the contractility of the uterus will be investigated using the in-vitro experiment of the isolated rat uterus. The study aims to assess the most outstanding plants that are used to treat menstrual disorders, their uterine contractility properties, and adverse effects. The study will therefore acknowledge the importance of medicinal plants in the study of new drugs for regulating uterine contractility and propose suggestions for improving experiments involving medicinal plants on uterine contractility for drug development. The study will provide a direction as to whether the plant extract has drug development potential.

Menstruation is a regular phenomenon in the span of the female reproductive life, supposed to occur in monthly intervals, involving the discharge of blood from the uterus into the vagina.1 The menstrual cycle restores the body with essential chemicals and hormones to keep women stay healthy and helps renewal of the uterine lining, crucial to pregnancy.2 Therefore, menstrual disorders, including dysmenorrhea, premenstrual complications, menorrhagia, polymenorrhea, excessive bleeding, amenorrhea, oligomenorrhea, and irregular menstruation, are of great concern in medical science.2, 3, 4, 5

Many medicinal plants are being used as conventional remedies for reproductive health problems all over the world, but there are not many studies on their pharmacological effects on menstrual disorders.6, 7, 8 The need for an improved safety screening for medicinal plants is recognized at both the national and international levels.7, 8, 9 In accordance, the World Health Organization (WHO) has presented recommendations on pharmacovigilance.10 As medicinal plants have been used in the development of several modern medicines, extensive research on pharmacological actions may lead to new drug development from medicinal plants.11 Detailed information on pharmacological properties, potential advantages, and side effects is required for the safe and effective incorporation of traditional medicinal therapies into mainstream medicine. Our current study has explored potential sources of drug development for menstrual disorders by a qualitative analysis of published literature of in-vitro rat uterus experimental studies.

Uterus is one of the most important parts of female reproductive system due to its indispensible role in menstruation, ovulation and pregnancy. The uterus is made up of 3 layers, namely the endometrium, the myometrium and the perimetrium. The myometrium, consist of both circular and longitudinal layers of muscles. The endometrium, the innermost layer of the uterus, grows to a thick, blood vessel rich tissue layer during menstruation. Lastly, the perimetrium, is the outermost smooth layer that covers the uterus. Major part of the uterus is made up of smooth muscles, which contracts and relaxes spontaneously and rhythmically.12, 13, 14

The uterus has a vital role in maintaining reproductive physiology. The uterus prepares itself to receive a fertilised ovum in a non pregnant female. It is also responsible for the expulsion for the foetus once pregnancy occurs, the regulation of postpartum bleeding with the expulsion of the endometrial layer during the menstruated cycle.

Most of the pharmacological studies are performed on rat and the effects of medicinal plants on uterine contraction are also evaluated in vitro on rat uterus. The rat uterus consists of two uterine horns that join together and the shape of the uterus in rats is called a duplex. There are two wholly separate uteri, with one fallopian tube each. The uterus opens into the vagina through two separate cervices. The duplex uterus is common in some animals and will accommodate multiple embryos (a litter).15, 16

For in vitro pharmacological experiments on rat uterus, the rat is sacrificed and sections of uterus are oriented to measure changes in contraction of longitudinal or circular muscle layers, and mounted in 14 ml organ baths in physiological salt solution with aeration of 95% 02 and 5% C02 at 37°C. The De Jalon’s solution is used in the preparation of rat uterus for experiment. This is a physiological solution that is used to maintain the viability of tissues. The De Jalon's solution contains in mmol/L NaCl, 153.9; KCl, 5.6; NaHC03, 6.0; CaCl2, 0.25; glucose, 2.8. whereas regular physiological solution such as the Krebs solution contains NaCl, 118.0; KC1, 4.7; NaHC03, 25.0; MgS04-7H20, 0.45; KH2P04, 1.03; CaCl2, 2.5; glucose, 11.1 in mmol/L.17 De Jalon’s solution contains less calcium than the Krebs Solution. This solution is suitable for the experiment because it reduces the amount of spontaneous contractions produced by the uterus of the rat, thus limiting the possibility for error when determining if an agent causes a contraction or not. . Isometric tension is measured by tension-displacement transducer. In uterine, beta adrenoceptors, histamine ,bradykinin are the research interests for which De Jalon’s solution is better. The uterine contractions indeed are vital. Therefore, the studies of substances that regulate uterine contractions of the female genitals are essential in the development of new drug therapy and treatments that can aid in the management of the pathologies regarding uterine contractions.

To obtain compounds for drug development, a variety of approaches have been used, including isolation from plants and other natural sources, synthetic chemistry, combinatorial chemistry, and molecular modeling. Despite pharmaceuticals' and financing agencies' current engagement in molecular modeling, combinatorial chemistry, and other synthetic chemistry techniques, natural products, especially medicinal plants, continues to be a major source of new drugs, drug leads, and chemical entities (NCEs).

Arteether is an anti-malarial medication extracted from artemisinin, derived from the artemisia annual plant. Traditional Chinese medicine uses the plant Artemisia annua (Family: Asteraceae). Galanthamine is a natural product that was first isolated from Galanthus woronowii (Family: Amaryllidaceae). Galanthamine is a drug that is used for the treatment of Alzheimer's disease. In the United States, tiotropium was approved for the treatment of chronic obstructive pulmonary disease. Tiotropium is an inhaled anticholinergic bronchodilator derived from Atropa belladonna L. (Solanaceae) and other members of the Solanaceae family and dependent on ipratropium, a derivative of atropine. Figure 1 shows Drug Discovery process from plants.11 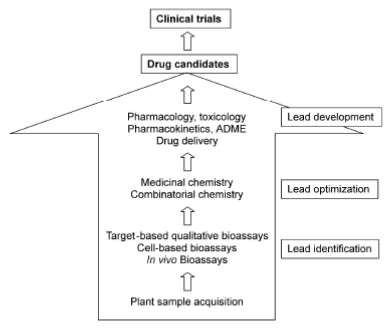 So, medicinal plants are potential sources of new drug development. Different in-vitro studies have shown their effects . They should be further analysed for determining the active molecules for this effects.

Talinum paniculatum (Jacq.) Gearth, also known as Ginseng Java, is known to benefit the female reproductive system by promoting lactation and restoring uterine activity following childbirth. Sukwan et al., (2014) studied the impact of Ginseng Java root extract on uterine contractility and potential mechanisms of action.18 They used kreb’s solution with aeration of 100% 02 at 37°C (Table 1). The extract showed the effective and consistent ability to decrease spontaneous myometrial contractility in a concentration-dependent way, but no effect on postpartum contractility and appeared to be helpful in the reduction of inappropriate uterine contractions. The potential mechanism of actions against both spontaneous and agonist-induced contractions is the reduction of the sensitivity of the contractile system to Ca is blockade of Ca influx through L-type Ca channels, thus inhibiting Ca release.

Tabernanthe iboga ( Family : Apocynaceae) is a shrub and Ibogaine, the active alkaloid is extracted from the root barks of this plant. Oreščanin-Dušić et al., (2018) used De Jalon’s solution with 95% 02 and 5% CO2 at 37°C and found Ibogaine to reduce the contractile properties of the uterus in a dose-dependent manner by affecting both naturally active and Ca2+-stimulated contractions. Low doses of ibogaine induced spontaneous contractions, which may be partially linked to an increase in extracellular ATP. Ibogaine in high concentrations inhibited naturally active and Ca2+-stimulated active uteri. This decrease in the contractile activity is at least partially contributed by ibogaine-related alterations in redox homeostasis and changes in concentration of reactive oxygen species (ROS).

Azanza garckeana, commonly known as Goron Tula, belongs to the Malvaceae family. It has been reported to be used in herbal medicine for the prevention and treatment of over 20 human diseases and ailments including menstrual irregularities, miscarriage, sexually transmitted illnesses etc.

Ficus deltoidea (Family: Moraceae), is a perennial herb that is used to help with labor, uterus firming after birth, and preventing postpartum bleeding. Salleh & Ahmad, (2013) used the combination of NaCl (155 mM), KCl (4.5 mM), MgCl2 (1.0 mM), CaCl2 (2.0 mM) and D- glucose (10 mM) as physiological solution and the pH was kept 7.40 with NaOH with a consistent exposure to 95% 02 and 5% CO2 at 37°C (Table 1). The study provided scientific evidence for inducing in-vitro contraction effect in a dose-dependent manner. They found contraction to be mediated by several uterotonin receptors and reliant on the extracellular Ca2+, but independent of the internal Ca2+ release. It can be used for post-partum uterine contraction and in some menstrual disorders.

Citrus aurantium belongs to Rutaceae family. Ahangarpour et al., (2011) prepared rat uterine with De Jalon’s solution at 29°C with bubble of air to evaluate the effects of flower aqueous extract on uterine contraction. They found the extract having antispasmodic effect mainly via calcium influx blockade without involving ß- adrenoceptors, and opioid receptors. However, neither β-adrenoceptors nor opioid receptors were involved. Since the extract has antispasmodic effect on uterus contraction therefore can be researched for use in dysmenorrhea.

All these plants can be further researched to develop drugs for menstrual disorders. Previous studies indicate that plants are one of the most potential source for medicine discovery. Menstrual disorders are very common and our research can help to develop new drugs from the suggested sources.

Da Silva I B Rafaela Damasceno S Maco Dpc Randau K P Use of medicinal plants in the treatment of erysipelas: A reviewPharmacogn Rev20181224200207

P. Arefin A Review on the Ayurvedic Management of Causes and Symptoms of Bronchial Asthma. ASA Univ Rev. 2015;J Contribution9226976.