None of the compound of this class has been entered into the market till date, all are under clinical trials. Hence, various researcher classifies them according to their p53 topology mimetic property and as per their peptide type or non-peptide type.

In a line with synthetic inhibitors, many potent MDM2 inhibitors are derived from the natural origin (marine, fungus). Therefore, keeping in a view of all these characteristics, here we have classified them as per best of our knowledge.

MDM2 inhibitors (p53-MDM2 interaction inhibitors) are emerging class of the anti-cancer agents, which can selectively target the cancer cells over the normal cells.1 Many potential MDM2 inhibitors have been developed by the various developers, and they proved to be very efficient in non-genotoxic direct activation of p53 protein function in the cancer cells (apoptosis).

Till date, no proper chemical classification of MDM2 inhibitors is available. Hence, in this review we have tried to classify them based on their origin, chemical and functional types.

Basically, MDM2 inhibitors are classify according to natural origin or synthetic origin. They are further classify based upon their chemical characteristics and functionality.

These are the natural products or natural compounds, isolated from the nature. MDM2 inhibitors belongs to the natural origin are come under this class.

Isoliquiritigenin (4,2,4-trihydroxychalcone) is a natural chalcone (figure 2), isolated form the shallot and licorice root. It induces the p53 dependent cell cycle arrest and cell death in the liver cancer cells.4 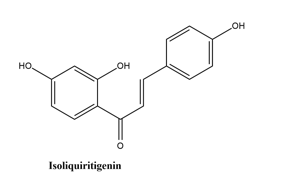 Chlorofusin was the second natural product, identified as MDM2 inhibitors. Chlorofusin was first isolated in 2001 by Duncan from the Fusarium sp. Microdocium caespitosum, a type of marine sponge.5

Later on, Williams and co-worker were also reported the chlorofusin. They had identified the chlorofusin after the testing of 53,000 extracts from the fermentation of a diverse collection of micro-organisms for MDM2 inhibitors activity.5 This novel metabolite was isolated from the microdochium caespitosum. 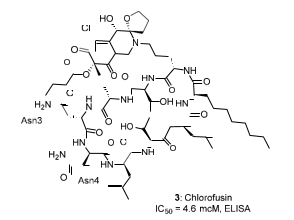 The full peptide and azaphilone structure are required for inhibition of the p53-MDM2 interaction. In the study, chlorofusin binds with the N-terminal region of the MDM2 protein and inhibits its activity.

Hexylitaconic acid-(-) is a good MDM2 inhibitor from natural origin (figure 4). It was reported recently. Arthrinium sp. fungus was isolated from the marine sponge, and hexylitaconic acid was derived from the fermentation culture of this fungus.9

The result of various studies indicated that the hexylitaconic acid can effectively inhibit the p53-MDM2 interaction and can able initiate the p53 function. 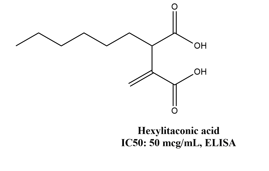 Synthetic MDM2 inhibitors are comes under this class. These types of inhibitors are designed and developed by the various researchers. They are further classified as peptide inhibitors and non-peptide (small organic) inhibitors.

These types of inhibitors are synthetic peptides (proteins). Peptides based inhibitors can be designed to successfully mimic the alpha helix topography of the p53 protein. So, they can be developed as potent p53-MDM2/X interaction inhibitors.11

MDM2 binding site on p53 protein was mapped by the Novartis group. They mapped it by using the synthetic peptide libraries derived from the N-terminal region of p53.12 The most active peptide obtained from this study (figure 5), was having the 28 folds greater MDM2 inhibitory property than the wild type p53-derived peptide.

Peptides based MDM2 inhibitors have a structural similarity with the p53 sequence, so it easily permits the entry into the cells. They can mimic the conformation of the p53 helix and cause non-genotoxic activation p53 function. These types of inhibitors have an advantage of the possibility of high specificity, potency and low toxicity.13 These synthetic linear peptides can adopt a helical conformation and inhibit the p53-MDM2 interaction.

Use of this linear peptide as drugs has faced some problems, which are:

Other strategy to overcome the rapid enzymatic degradation is to use D-amino acids for synthetic peptides chain. This type of peptides are far more stable to proteolytic degradation, as enzymes present in the body are only capable of processing L-amino acids due to their stereo-specificity.

These are some of the approaches to stabilize the peptides.15 Though many of peptides are reported, which can inhibit p53-MDM2 interaction. But there are currently no peptide based inhibitors in clinical trials.

These MDM2 inhibitors are small organic (non-peptide) compounds that place substituents in the same spatial orientation as the p53 helix. They do not mimic the α-helix topography. These types of compounds are the competitive inhibitors of MDM2 protein.

By using the High Throughput Screening (HTS) campaigns at Hoffmann-La Roche, Vassilev and colleagues were discovered the first compound of this class called as Nutlin. Nutlin contains the cis-imidazoline (4,5-dihydroimidazoline) moiety. Nutlins mimic the three main amino acid residues on p53 (i, i+4, i+7), involved in its interaction with MDM2.16 Hence, it shows 3 pocket binding. And inhibit the p53-MDM2 interaction. Nutlin group contains three compounds, Nutlin-1, Nutlin-2 and Nutline-3 (figure 6). Among them, Nutlin-3 is most potent compound (IC50 — 90nM).

Assay of nutlin on various cell lines, shows the dose dependent MDM2 inhibition and activation of wild type p53 protein function. Currently, there are total seven compounds of this class, which are under clinical trials.

In our study, we have designed and developed this type of MDM2 inhibitors. Therefore in this thesis, MDM2 inhibitors of this class will be discussed in details.

Inhibitors pertaining this class are organic in nature and mimics the α-helix of p53. They mimic the topography of α-helix and can position the substituents in the same spatial orientation as the 3 different interaction points of p53 helix. With contrast to Functional mimetics, these types of inhibitors are generally more extended.17

This class of compounds has a good potential of inhibiting the p53-MDM2 interaction effectively.

We can classify the MDM2 inhibitors as per their origin and their chemicals class. Then they can be further sub-divided as per peptide nature or small organic molecule. Synthetic non-peptide inhibitors consist of the diversified chemical groups and moieties. So, it provided the separate sub-type of the inhibitors. As a whole MDM2 inhibitors can be also divide as α-helix (p53) mimetics and non-mimetics. There are totally 09 MDM2 inhibitors under clinical trials, among them 08 are non-peptide small organic compound and 01 is synthetic (stapled) peptide type.