Parshuramkar, Umekar, and Gupta: Development and validation of dissolution test method for determination of cyclobenzaprine hydrochloride from its formulation using HPLC

Aim: The aim of present study was to develop and validate a dissolution test method for Cyclobenzaprine HCL in its formulation using RP-HPLC method.

Design: Optimization of chromatographic parameters, development of the dissolution test method using RP-HPLC and to validate the developed methods as per ICH guidelines.

Conclusion: The results obtained by proposed dissolution method for tablet formulation containing Cyclobenzaprine HCL are reliable, precise and accurate. Hence it was routinely adopted for dissolution analysis of the said drugs in the formulation.

Cyclobenzaprine Hydrochloride (CBZ) chemically known as 3-(5H-Dibenzo[a,d]1 annulen-5-ylidene)-N,N-dimethyl-1-propanamine hydrochloride.2 (Figure 1) The molecular formula & molecular weight of Cyclobenzaprine isC20H21N and 275.4g/mol. Cyclobenzaprine is a off-white crystalline tricyclic amine salt that is freely soluble in water and alcohol, slightly soluble in chloroform and methylene chloride, practically insoluble in hydrocarbons. Cyclobenzaprine is a centrally acting skeletal muscle relaxant with antidepressant activity.3, 4 The exact mechanism of action of cyclobenzaprine has not been fully determined, but this drug seems to primarily act at the brain stem to reduce tonic somatic motor activity, influencing both gamma and alpha motor neurons leading to a reduction in muscle spasms. cyclobenzaprine is used short-term to treat muscle spasms associated with acute, painful musculoskeletal conditions. It is usually used along with rest and physical therapy. It works by helping to relax the muscles.5, 6

Literature survey revealed that many analytical methods like UV, HPLC, HPTLC DSC, FT-IR and LC-MS for the determination of cyclobenzaprine in pure drug, pharmaceutical dosage forms and in biological samples have been reported.7, 8 But no method have been reported for dissolution study of cyclobenzaprine hcl in solid dosage forms, So, the aim of the existing work to development of dissolution test method using RP-HPLC method for analysis of cyclobenzaprine HCL in Tablets and to validate dissolution method accordance with ICH guidelines for, precision, linearity and range, accuracy, ruggedness and robustness study.

The standard solutions cyclobenzaprine HCl was prepared in Methanol having concentration 10 µg/ml and subjected to U.V. spectrophotometeric study to determine λ max of drug over the wavelength range 200-400 against Methanol as blank solution. Cyclobenzaprine shows maximum absorption at 223.6 and 289.4nm, the wavelength selected was 289.4 nm. The spectrum recorded is shown in Figure 2.

Dissolve 1.36 g of potassium dihydrogen orthophosphate and 2 mL of triethylamine in 800 mL of water, Adjusted pH to 3.0 with orthophosphoric acid and add sufficient water to produce 1000 mL.

A mixture of Acetonitrile and Phosphate Buffer (pH 3.0) in the ratio of 65:35v/v was prepared. The mobile phase was sonicated for 15 min and filtered through nylon membrane filter (0.45μm).

A standard stock solution having concentration 1000 µg/mL of CBZ was prepared in mobile phase.

Chromatography was achieved on a Shodex C18-4E column(250 x 4.6 mm). The mobile phase was a mixture of ACN: Phosphate buffer in the proportion of 65:35 % v/v and adjusted pH to 3.0 with orthophosphoric acid which was filtered (0.45μm) and degassed before use. All analysis was performed at room temperature at a flow rate of 1 mL/min. Detection was made at 289.4 nm. A 20 μL volume injection were utilized for analysis.

The system suitability study was carried out using six replicates injections of standard solution containing 20µg/mL of CBZ was prepared in mobile phase. A 20µL of solution were injected through manual injector and analyzing the chromatograms for peak area, theoretical plates, % RSD and tailing factor. Results are shown in Table 1.

Drug dissolution tests were carried out with USP apparatus II (paddle type) at 50 rpm with dissolution volume of 900mL. Thermostatic bath was used to maintain the temperature of the cell at 37°C±0.5°C. Various dissolution media’s were tried out of which 0.1 N HCL (1.2 pH) was selected. Weighed and dropped 1 tablet in each of the six dissolution vessel containing 0.1 N HCL (pH 1.2) for the drug under analysis. Aliquots of 5.0 mL were withdrawn at 5, 10, 20, 30, 40, 50 and 60 min time interval, used as sample and replaced with an equal volume of the fresh medium to maintain a constant total volume. After the end of each time point, sample aliquots were filtered and chromatographed. The percentage drug release was estimated by validated HPLC method at each time point.

Results showing effect of change in USP apparatus on CBZ

Observation of linearity response of CBZ

Observations and result of recovery for CBZ 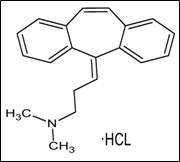 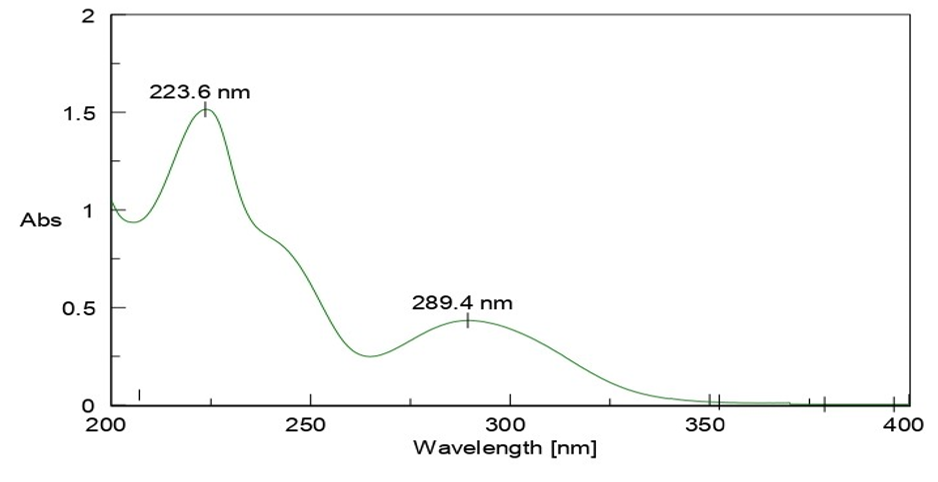 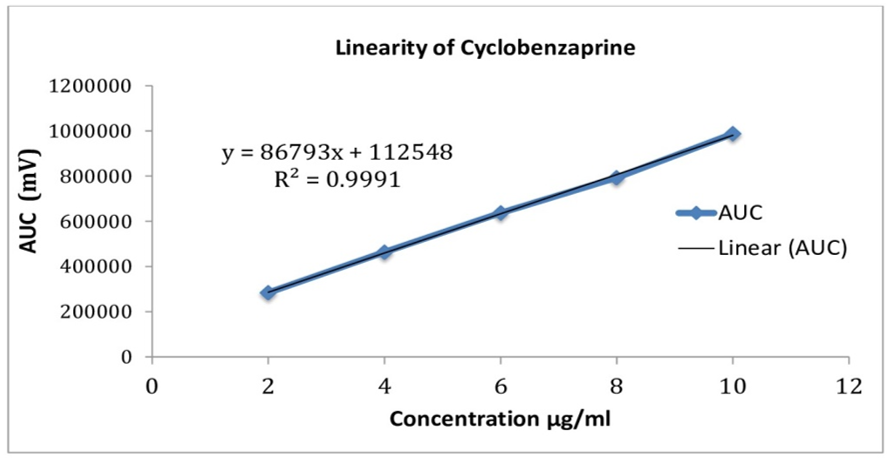 Chromatogram of standard under optimized condition

Chromatogram for Test sample at 10 min

Chromatogram for Test sample at 15 min

Chromatogram for Test sample at 20 min

Chromatogram for Test sample at 25 min

Chromatogram for Test sample at 30 min

Chromatogram for Test sample at 45 min

Chromatogram for Test sample at 60 min

To study the effect of change in USP apparatus, 0.1 N HCL (pH 1.2) was selected as dissolution media. A media volume of 900 mL and thermostatic bath temperature was kept constant and the dissolution was performed on two different USP apparatus. The results were evaluated for cyclobenzaprine. The % drug release for two apparatus types were calculated.

Change in the volume of dissolution media

The dissolution media used in the above study was kept constant, 0.1 N HCL (pH 1.2) whereas dissolution media volume was varied from 500 mL and 900 mL, performed using USP apparatus type II. The % drug release was calculated.

The dissolution test method was validated to through the determination of linearity, precision, accuracy, solution stability. Prior to injecting sample solutions, the column was equilibrated for at least 30 min with the mobile phase flowing through the system.

The linearity for CBZ with respect to concentration was demonstrated by considering the label claim of the CBZ as 100% target concentration. Linearity was studied by analyzing five standard solutions covering the range of 2-10µg/ml. From the working standard solution (100 µg/ml) 0.2ml, 0.4ml, 0.6ml, 0.8ml and 1.0ml of aliquots were pipetted out into a series of 10 mL volumetric flasks and volume made up to the mark with the mobile phase to get concentrations in the range of 2µg/ml-10µg/ml respectively. Calibration curve of peak area versus % target concentration was plotted by injecting the above prepared solutions and calibration curve is shown in Figure 3.

The accuracy of the proposed method was evaluated by spiking method i.e. adding known amount of CBZ standard drug (80%-120%) to that of target dissolution concentration as per the labeled claim of 5 mg CBZ formulation respectively. Accordingly pure drug was added at the selected levels along with 5.0 mg tablet. Dissolution of the drug was performed using optimized dissolution parameters. Aliquots of 1.0 mL were withdrawn and filtered through whattman filter paper and analyzed by chromatographic method at spiked concentration levels of 80%, 100 and 120%, respectively. Each concentration was analyzed in triplicate. The system was allowed to equilibrate for 30 minutes by passing mobile phase through chromatographic column at a flow rate of 1.0 mL/min. After equilibration, triplicate injections of test solution of different concentration having a volume of 20µL were injected. Total amount of drug estimated and recovered was calculated.

Range of the Analytical procedure is the interval between the upper and the lower concentration (amounts) of analyze in the sample for which it has been demonstrated that the analytical procedure has a suitable level of precision, accuracy and Linearity.

The ruggedness of an analytical method is the degree of reproducibility of test results obtained by the analysis of the samples under a variety of conditions. The method was studied for ruggedness by analysing sample and standard preparation by two different analyst.

The robustness of an analytical procedure is a measure of its ability to remain unaffected by small, but deliberate variations in method parameters and provides an indication of its reliability during normal usage. The robustness of test method was carried out for following parameters:

The optimized chromatographic condition mentioned below was kept constant throughout the experimentation and mobile phase was allowed to equilibrate with stationary phase which was indicated by a steady line.

A 20 μL solution of above mix standard was injected through manual injector and chromatogram was recorded. A standard chromatogram for cyclobenzaprine HCl is shown in Figure 4.

Optimization of dissolution method parameters for estimation of cyclobenzaprine

Change in the volume of dissolution media

The peak area of linearity solutions noted was plotted against the corresponding concentrations to obtain the calibration graph. The correlation coefficient were found to be 0.9991 and the calibration data is presented in Table 7. The proposed method gives linear results with wide range of concentration of drug.

The results of accuracy data at different spike level are shown in Table 8. From the accuracy studies the mean % recovery of drugs at each accuracy level was found to be 100.04%, Which is found to be in the acceptance range of 95%-105%. It was proved that method is accurate.

The observation and the result of ruggedness study for drug is summarized in the Table 12. Ruggedness of the method is evaluated by analysis of aliquots from homogenous slot by two different analyst. The RSD between two different analysts should not be more than 2.0%. The proposed method was found to be rugged.

The robustness of the method was evaluated by injection of the sample at deliberately varying the chromatographic conditions i.e change in flow rate by 0.2mL/min, change in wavelength and pH by ±5. The method was found to be robust. The results obtained by robustness study are given in? Table 13.

The authors declare no conflict of interest.

I am very much thankful to Principal, S.K.B. College of Pharmacy, kamptee for providing the necessary facilities for the completion of work.