Bhangale and Hiremath: Validated stability indicating RP-HPLC method for the determination of phenazone and lidocaine hydrochloride in bulk and dosage form

The objective of the present work is to develop a simple, precise, accurate, validated stability indicating RP-HPLC method for the determination of Phenazone and Lidocaine hydrochloride in bulk and tablet dosage form. The HPLC separation was achieved on Agilent TC C18 (2) 250 x 4.6 mm, 5 μ column using mobile phase composition of phosphate buffer pH 2.5, acetonitrile, Methanol 70:20:10 (V/V/V). Flow rate was maintained at 1.5 ml/min at an ambient temperature. Quantification was achieved with ultraviolet detection at 230 nm. The retention time obtained for Lidocaine hydrochloride was at 7.2 min of and Phenazone was at 10.1 min. The result obtained with the detector response was found to be linear in the concentration range of 50-150 μg/ml for Phenazone and 10-70 μg/ml for Lidocaine Hydrochloride. The reliability and analytical performance of the proposed methods, including linearity, range, precision, accuracy, detection and quantitation limits, were statistically validated. When of Phenazone and Lidocaine hydrochloride was subjected to different stress conditions; the proposed methods could effectively separate the drug from its degradation products, and were thus considered as good stability-indicating procedures. It is concluded that this method can be applied for routine quality control of Phenazone and Lidocaine Hydrochloride in dosage forms as well as in bulk drug.

Phenazone (INN; also known as phenazon, antipyrine (USAN), or analgesine) is an analgesic, a non-steroidal anti-inflammatory drug and an antipyretic.1 It is formed by reducing diortho- dinitrodiphenyl with sodium amalgam and methyl alcohol, or by heating diphenylene-ortho-dihydrazine with hydrochloric acid to 150 °C. Phenazone contains not less than 99.0 per cent and not more than the equivalent of 100.5 per cent of 1,5-dimethyl-2-phenyl-1,2-dihydro-3H-pyrazol-3-one calculated with reference to the dried substance.2 Antipyrine is an analgesic and antipyretic that has been given by mouth and as ear drops. Antipyrine is often used in testing the effects of other drugs or diseases on drug-metabolizing enzymes in the liver.3 Lidocaine is an amine-amide local anesthetic, chemically known as 2-(diethyl-amino)-N-(2,6-dimethylphenyl)-acetamide(Figure 1).4 Lidocaine stabilizes the neuronal membrane by inhibiting the ionic fluxes required for the initiation and conduction of impulses, thereby effecting local anesthetic action.5

Literature survey revealed, few analytical methods which include UV-spectrophotometric methods.6, 7, 8, 9, 10 liquid chromatographic methods11, 12, 13, 14, 15, 16 have been reported for estimation of PNZ. However, to our knowledge, no information related to the stability-indicating HPLC determination of PNZ in pharmaceutical dosage forms has ever been mentioned in literature. According to the stability test guidelines issued by ICH,17, 18 in the present study the stress induced stability studies were carried out for PNZ and LID to establish its stability characteristics. Hence, an attempt has been made to develop an accurate, specific and reproducible method for the determination of PNZ and LID in combined dosage forms in presence of degradation product for the content analysis during stability studies from pharmaceutical dosage form.

Pharmaceutical grade of Phenazone and Lidocaine HCL kindly supplied as a gift sample by Glenmark Pharmaceutical Ltd., Nashik, India. All chemicals and reagents used were of HPLC of analytical grade and were purchased from Merck Chemical. India. Analytical grade sodium hydroxide, hydrochloric acid and 30% hydrogen peroxide were used.

Agilent technologies 1260 LC system with gradient pump connected to DAD UV detector, LC-GC AGN204PO balance was used for all weighing An Agilent zorbax eclipse C18 column (150 mm × 4.6 mm i.d., 5 μm) was maintained at 30°C. The mobile phase was composed of a mixture of phosphate buffer pH 2.5, acetonitrile, Methanol 70:20:10 (V/V/V). The flow rate of the mobile phase was set at 1.5 mL min-1. Measurements were made with 20 μL of injection volume. The retention time obtained for LID was at 7.2 min and PNZ was at 10.1 min(Figure 2). For the analysis of forced degradation samples, the photodiode array detector was used in scan mode with a scan range of 200–400 nm.

Weigh accurately about sample equivalent to 50mg of LID HCl and 200mg of PNZ into a 100ml volumetric flask, add 80 ml of methanol disperse the sample by shaking the flask and sonicate for 3 to 5 min, cool to room temperature and make up to the volume with methanol.

Dilute 5ml of above solution to 100ml diluent and mix well. The solution was filtered using 0.45 µm filter (Mill filter, Milford, MA). From filtrate, dilution was made to obtain the final concentration and the amount of LID and PNZ was determined. The assay procedure was repeated for six times.

The method was validated for its linearity range, accuracy, precision, sensitivity and specificity. Method validation is carried out as per ICH guidelines.

Intra- and inter day precisions of the methods were determined by performing replicate (n=3) analyses of standards and samples. This procedure was replicated on different days (n=3). Recovery studies by standard addition method were performed in view of justifying accuracy of the proposed methods. Previously analysed samples containing LID and PNZ was spiked with standard LID and PNZ, and the mixtures were analysed in triplicate (n=3) by proposed methods. Precision was calculated from percentage relative standard deviation (RSD%) for repeated measurements, whereas accuracy was expressed as % of recovery.

Robustness and ruggedness of the method

Robustness of the method was studied by making deliberate variations in the chromatographic conditions and effects on the peak areas were recovered. Different chromatographic parameters such as variations in flow rate, column oven temperature, mobile phase composition and change in pH of mobile phase were made. It was performed using PNZ and LID HCl, the effects on the peak areas were recorded. The each parameter was repeated for six times..

Six sample preparations of PNZ and LID HCl were analyzed by a different analyst, using different column, on different day and injected in to a different HPLC system using same operational and environmental conditions.

Limit of detection and limit of quantitation

Sensitivity of the proposed method was estimated in terms of Limit of Detection (LOD) and Limit of Quantitation (LOQ). For study of sensitivity of the method lower part of the linearity curve was selected. From the stock solution, six different concentrations in the range of 10,20,30,40,50 µg/mL for PNZ and 2,4,6,8,10 µg/mL for LID were prepared and injected into the column. Each concentration was injected into column for three times, and peak area was recorded. The LOD was calculated using formula LOD = 3.3 ASD /S and LOQ = 10 ASD/S, where ASD is the average standard deviation and S is the slope of the corresponding calibration curve line.

The method is quite selective. There was no other interfering peak around the retention time of PNZ and LID; also the base line did not show any significant noise.

Separate variable was set and mobile phase was allowed to saturate the column at 2.0 ml/min. After complete saturation of column, six replicates of working standard of LID HCl and PNZ were injected. They are used to verify the suitability for the resolution and reproducibility of the chromatographic system.

A stock solution containing 10 mg for PNZ and 10 mg of LID in 10 mL methanol was prepared. This solution was used for forced degradation to provide an indication of the stability-indicating property of the method.

PNZ and LID solution treated with 1 mL of 1 M methanolic HCl. The solutions were kept at room temperature for 8 hr. The solution was diluted with the mobile phase to reach a final concentration of 50 μg/mL of PNZ and LID and injected to the column.

PNZ and LID solution treated with 1 M methanolic NaOH. The solutions were kept at room temperature for 8 hr. The solution was diluted with the mobile phase to reach a final concentration of 50 μg/mL of PNZ and LID and injected.

The drug solution was left in sunlight for 8h. The resultant solution was treated as described for hydrogen peroxide-induced degradation.

The powdered drug was stored for 3h under dry heat conditions at 55°C. In UV, 10 mg sample was dissolved methanol and volume made up to 10 ml. The solution was diluted with the mobile phase to reach a final concentration of 50 μg/mL PNZ and LID. The chromatograms were run by injecting the sample in the column.

Initially, combination of acetonitrile and water (50:50 v/v) was tried as mobile phase but broadening of the peak was observed. Then, pH of the mobile phase was adjusted to 3.0, the chromatogram showed fronting and splitting. To overcome the problem combination of phosphate buffer: acetonitrile: methanol (70:20:10v/v/v) was tried for resolution of PNZ and LID. Good resolution and symmetric peak was obtained for PNZ and LID when the pH of the mobile phase was adjusted to 2.5 and column oven temperature was kept at 300C. Under these optimum chromatographic conditions, the retention time for LID was found to be 7.2 ± 0.02 min and PNZ found to be 10.1 ± 0.02 min at a flow rate of 1.5 mL/min. The detection was carried out at 230 nm.

Precision was determined as intra-day and inter-day variations.

Intra-day variation of the method was performed by analyzing, the three different concentrations 60 mg/mL, 80 mg/mL and 100 mg/mL of PNZ and 15 mg/mL, 20 mg/mL and 25 mg/mL of LID, for three times in the same day. Inter-day variations of the method were performed by analyzing the same concentrations for the period of the three consecutive days over a period of week. % R.S.D. was found less than 2 which indicates method is more precise.

Robustness and ruggedness of the method

The results of robustness testing showed that little change of method conditions, such as pH of the mobile phase, composition of the mobile phase, temperature, flow rate, and wavelength, does not affect the method significantly, and so it is robust within the acceptable limits. Percent of recovery was within the range of for LID 99.0% to 101.0% and for PNZ was found to be 99.65-101.23%. The % R.S.D. less than two values indicated robustness of the method.

System suitability tests were also carried out to verify reproducibility. The parameters such as capacity factor (K), injection repeatability tailing factor (T), theoretical plate number (N) and resolution (Rs) for the principal peak and its degradation product were tested on a20 µg/mL of LID and 80 µg/mL of PNZ to assist the accuracy and precision of the developed HPLC system. The results are as shown in Table 1.

Summary of validation parameter are as shown in ? Table 2. 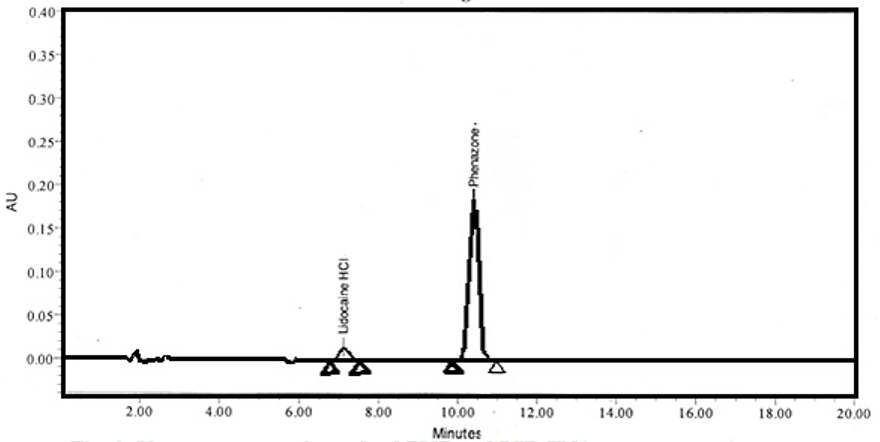 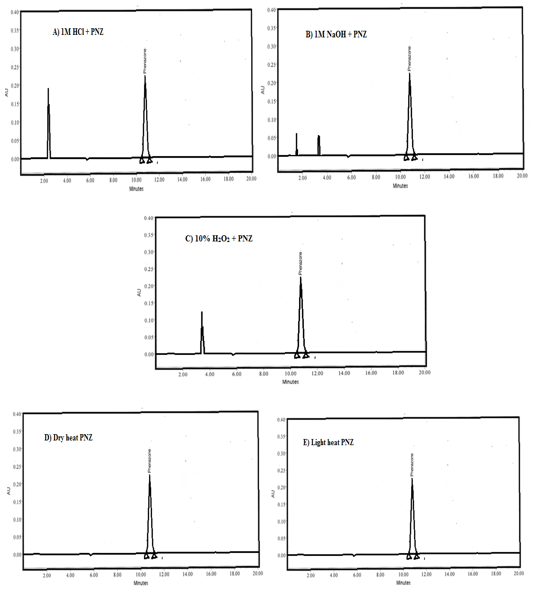 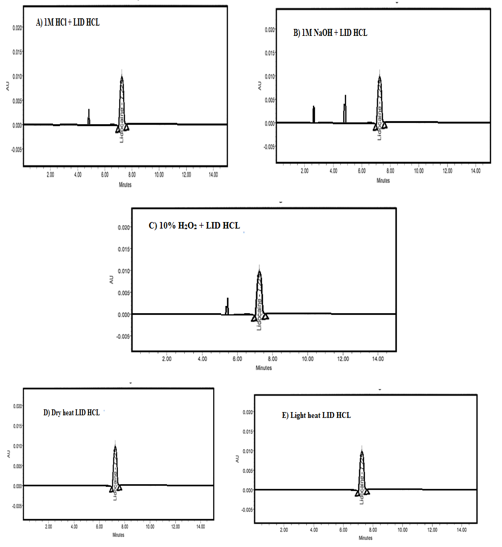 Analysis of the marketed formulation

Six replicate determinations were performed on the commercially available formulation. For LID recovery was found to be 99.66±0.56% and for PNZ recovery was found to be 100.16±0.46%. There was No interference was observed from the excipients commonly present in the ear drop. It may, therefore, be inferred that degradation of PNZ and LID have not occurred in the marketed formulations analysed by this method. The low RSD indicated that the method is suitable for routine estimation of LID and PNZ in pharmaceutical dosage forms.

The proposed HPLC method provide simple, accurate and reproducible quantitative analysis for determination of PNZ and LID and in tablet. The method was validated as per ICH guidelines. As the method could effectively separate the drugs from their degradation products; therefore, it can be employed as a stability indicating study.

The authors declare that they have no conflict of interests.

Merck Index. An encyclopedia of chemicals, drugs and biologicalsMerck and Co., IncUSA1989113

A Plenis L Konieczna N Miękus T Bączek Development of the HPLC Method for Simultaneous Determination of Lidocaine Hydrochloride and Tribenoside Along with Their Impurities Supported by the QSRR ApproachChromatogr2013765-62556510.1007/s10337-012-2339-9